CEPI member countries’ paper and board production was stable in 2018, compared to the previous year, according to preliminary figures. Total production in 2018 reached 92.2 million tonnes.

2018 saw new capacities coming on stream but also closures. Combined with the upgrade of existing machines, this translated in a net capacity increase of 1.3 million tonnes. The production stability observed in Europe contrasts with the reduced global paper and board production, -0.6% in 2018 compared to 2017, to 417 million tonnes according to very first estimates. This reduction was mainly driven by China, whose production decreased by close to 4%.

Paper and board production in Japan, South Korea and the United States has also declined, whilst production in Canada, Russia and several emerging countries (India, Indonesia and Mexico, for instance) increased. 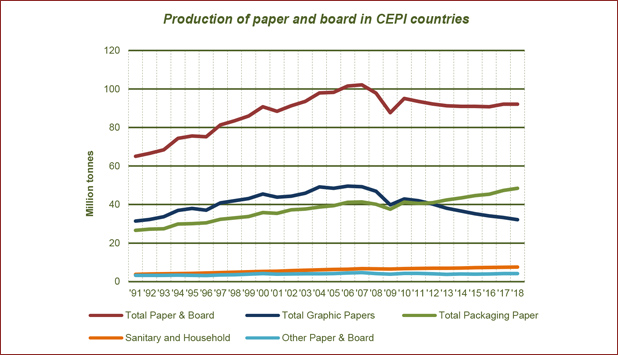 The structural divergence in the production trends for graphic grades and packaging grades was confirmed in 2018. The overall production of graphic grades fell by around 3.6%, with the highest decrease of 8.9% recorded in newsprint, used mainly for daily newspapers.

Overall this means that production of coated and uncoated graphic papers decreased respectively by 3.8% and 1.1%. Production of woodfree graphics showed a large decrease of 4.7% whilst output of mechanical graphic papers slightly increased by 0.6%.

The production of packaging grades is estimated to have increased by around 2.4% compared to 2017, despite the ongoing trend towards light-weighting and resource efficiency. Within the packaging grades, case materials – mainly used for transport packaging and corrugated boxes – recorded a 2.7% increase in production. The output of carton board plus other packaging board – small goods packaging or book covers for instance – grew by 2.8%. In contrast, the production of wrapping grades – used for paper bag production – showed a slight decrease of around 0.6% according to preliminary estimates. 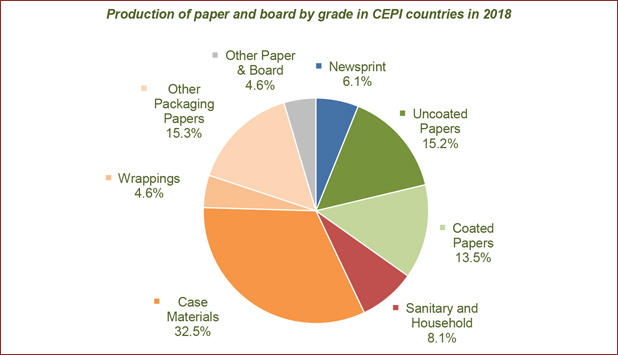 Sanitary and household manufacturers’ output increased by about 1.0% compared to 2017 and accounted for 8.1% of total production. Output of all other grades of paper and board – including some industrial and special purposes – remained virtually unchanged (4.6% of total production).

Paper and board deliveries by CEPI countries remain unchanged

Based on the first 9 month cumulative data, it is expected that paper and board deliveries for the year remained unchanged compared to 2017, mirroring production stability in Europe. By the end of September 2018, deliveries of graphic grades had decreased by 2.5% whilst deliveries of packaging grades rose by 1.7%.

Exports had slightly risen by 0.4% by the end of September 2018, with exports to North America and Latin America increasing by 9.8% and 4.2% respectively. Exports to other European countries registered a more limited progression (+0.9%), while those to Asia declined by 5.6%. European countries remain the main markets for exports with 36% of total European exports; Asia accounts for 25%, North America 13%, Latin America 9% and all other countries 17%.

Preliminary indications show that imports of paper and board into the region have increased by around 2.5% compared to 2017. Imports from other European countries declined by 1%, in contrast with all the other regions which saw growth: North America +3.3%, Latin America +6.5% and Asia +7.6%. Other European countries account for 43% of all European imports, North America 31%, Asia 12%, Latin America 6% and the rest of the world 9%.

Overall paper and board consumption increased by around 0.5%, the 5th consecutive year of growth

The overall consumption of paper and board in CEPI countries in 2018 increased by around 0.5% compared to 2017, based on the latest data available. This is the 5th year in a row registering growth, thanks to the favourable economic environment in the EU and at global level. EU GDP is expected to grow at a slightly lower pace in 2019: +1.9% after +2.1% in 2018.

Output of market pulp showed a stronger increase of 4.6%, as a consequence of substantial investments in new capacities and growing demand.

This site uses functional cookies and external scripts to improve your experience.

NOTE: These settings will only apply to the browser and device you are currently using.

The services contained in this section enable the Owner to monitor and analyze web traffic and can be used to keep track of User behavior.